David Mellor Jewellers is an independent family business with three retail Jewellery shops in Hampshire. On Wednesday 27th April their Andover shop was targeted by two raiders arriving on mopeds. The raiders attacked the outside windows and tried to force their way through the front entrance door but their progress was thwarted. Back in January  2015, the shop was installed with a Fog Bandit robbery deterrent system to protect the staff and the stock. Alerted by live CCTV, almost immediately, the vigilant staff initiated the high speed security Fog Bandit which in just two seconds projected a 6 metre blanket of visually impenetrable yet harmless fog across the shop, towards the entrance door and display cabinets.

Due to the security glass, the prompt reaction of the staff and the speed and density of the Fog Bandit security fog, the raiders fled the shop empty handed.

Thankfully no one was hurt and no losses were suffered.

“Our security measures in place stopped the raiders entering the shop.  Nobody was hurt, we did not suffer any loss and the shop is open for trading. Without the quick thinking of our vigilant staff and the deployment of the Fog Bandit the outcome could have been very different”.

“The Bandit UK Team applaud the staff during this incident for acting promptly in initiating the Fog Bandit and forcing the raiders to leave their shop empty handed. In the UK alone over the last 5 years, the Fog Bandit has successful foiled 32 raids at similar businesses without any failures. This is another example of the clear deterrent message to the criminal fraternity that targeting Jewellers and Pawnbrokers with a Fog Bandit system installed is a fruitless exercise and heightens the likelihood of being caught”. 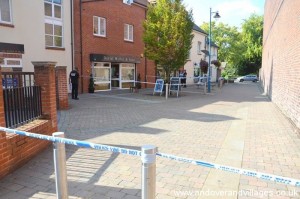