Intruders left empty handed during an attempted theft of cigarettes from the Spar Convenience Store in Wells Road, Malvern, Worcestershire on 1st August 2014.  On attempting to enter the store the Fog Bandit instantly activated high speed security fog to push the intruders out of the premises, minimising damage and ensuring the attempted theft was a fruitless exercise.

“We were contacted almost immediately by the alarm company and the Police. I think they were after the spirits and cigarettes but they didn’t get very far thanks to the Fog Bandit. It fills the shop with thick fog so they can’t see anything and it worked – they left without stealing anything”. 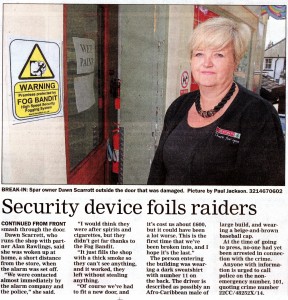