The FOG BANDIT leads the field by taking security fogging systems to a totally new level of effectiveness and reliability.  Utilising the latest patented technologies, the FOG BANDIT delivers ultra-dense fog at unprecedented speed to provide the very highest levels of protection against the losses and property damage associated with Golf Centre burglaries.

When sensors detect an intruder the BANDIT’s patented high-pressure system instantly delivers a dense, visually impenetrable fog at the incredible rate of 28 cubic metres per second, projecting it 6 metres in the first 2 seconds alone.  An average sized Golf shop of 140 cubic metres takes just 5 seconds to fill! The security fog is completely harmless to both individuals and stock, leaving NO residue.

Introducing new or strengthening existing Golf Centre defences simply increases their repair costs after a break in, costs which are often far greater than the value of goods stolen. Investing in a FOG BANDIT can avoid these costs, stop the losses and deter intruders from returning in the future.

Already installed at numerous Golf Clubs across the UK,  FOG BANDIT has a proven track-record at deterring and foiling theft from this important sector. 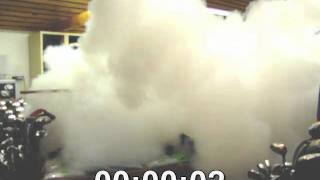